Causes And Rules Of Belt Conveyor Deviation (I)

Belt conveyor machine, also known as belt conveyor, is mainly used for loading, unloading, conveying and transporting goods and materials. It is mainly used in mining and port terminals. With the development of technology, belt conveyors also play an important role in other fields.

The second is tighter than loose. The belt conveyor needs to bear a large load during operation, so it is often in a state of fatigue operation. If the elasticity of the two sides of the belt is not the same, deviation will occur.

The third is higher or lower. The belt conveyor is affected by friction and pressure during the operation. It is difficult for the two sides of the belt to be on the same level. It will run to the higher end and affect the normal operation of the belt conveyor. 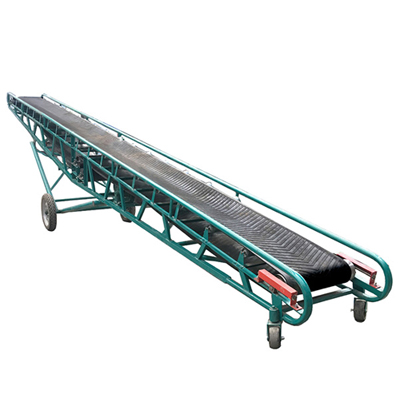 The belt conveyor runs for a long time, the device is worn and aging, and the staff fails to update and adjust the device in time. Improper installation will directly cause different tensions on the two sides of the belt during operation, and the corresponding friction will be different, which will cause Deviate. From the actual application situation, the main reason for uneven force on both sides of the belt conveyor is the aging of the belt device.

Belt conveyor during the conveying operation, the position of the material on the belt should be uniform and appropriate, and uneven placement will cause the belt to deviate during the operation. The main reason for the uneven feeding is that the position and direction of the falling material is incorrect. If the material is biased to the left, the belt will shift to the left, and vice versa.

Belt joints wear out due to long-term use, or joint damage caused by human causes, will become uneven. The belt is not straight or the vulcanization joint is not correct, which will cause the tension on both sides of the belt to be inconsistent. During the running process, the belt will deflect to the side with high tension, and the belt joint will have the largest deviation angle.

If the belt conveyor is running for a long time, if the maintenance and renewal work is not in place, the parts are over-running, and the belt is constantly aging and relaxing, it will gradually produce irrecoverable deformation and aging, which directly reduces the tension. This will directly cause uneven internal stress and cause the belt to run off.

5.Uneven tension at both ends of the belt

The most important load-bearing mechanism of the belt conveyor is the belt, which is responsible for material transportation. Therefore, if the quality of the belt is not sufficient or the belt is used for a long time, wear and aging, uneven tension on both ends of the belt will cause deviation. Especially the belt joint or the deviation is not the most straight.

After a period of conveying materials, especially in the transportation of mineral materials, the belt conveyor often has material adhesion on the rollers or rollers, which makes the local thickness of the rollers or rollers increase, which causes uneven force on both sides Causes deviation. The belt is affected by the lateral forces of the roller and the supporting roller. If the installation positions of the two are deviated, the lateral force of the belt during the operation of the belt conveyor is inconsistent, causing the deviation. The lateral force is affected by many factors. If there is a large verticality error between the installation position of the supporting roller and the centerline or a large verticality error between the circumference of the drum and the centerline, the belt will run off, and The deviation is most obvious at the position where the rollers and rollers are installed.