Conveyors are generally classified by the presence or absence of traction members.

A conveyor with a traction member generally includes a traction member, a load bearing member, a driving device, a tensioning device, a redirection device, a support member, and the like. Traction parts are used to transmit tractive force. Canvas conveyor belts, traction chains or wire ropes can be used; load-bearing members are used to carry materials, such as hoppers, brackets or spreaders. Brakes (stoppers) and other components; tensioning devices generally have two types: screw type and heavy hammer type, which can keep the traction member a certain tension and sag to ensure the normal operation of the conveyor; the support member is used to support the traction member or The supporting member can be a trough idler, a roller, etc. 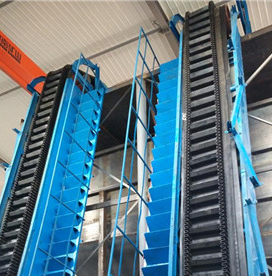 Belt conveyor is the most important modern bulk material conveying equipment. It is widely used in electric power, food, metallurgy, chemical industry, coal, mining, port, building materials and other fields. Belt conveyors have gradually begun to replace automobiles and locomotives in some areas because of the characteristics of a wide range of conveying materials, a wide range of conveying capabilities, strong adaptability of conveying routes, flexible loading and unloading, and high reliability and low cost transport. Becoming the main equipment for bulk transportation, playing an increasingly important role in the socio-economic structure. In particular, the electric drum-driven belt conveyor has incomparable advantages and development potential in the bulk material conveying process of the grain depot. Therefore, we open up our thinking, strive to innovate, and combine our original knowledge and existing data to control it. Make innovations. In this process, we test our own innovation ability to make it more widely used in various fields of the national economy and play a more important role.