Today, with the rapid development of the economy, more and more enterprises are inseparable from the automated conveyor system. Today, belt conveyor machine manufacturer and you come to see the development history of “conveyor”.

China's ancient high-revolution car and water-lifting are the prototype of modern conveyors. The car was invented in the Tang Dynasty and has a history of more than 1,000 years. The history of rollovers was even earlier, and there was a rollover from the Han Dynasty in China.

These two tools were used as water-lifting irrigation tools in ancient China, and they were low in water and high in water. From the application of rollover to the emergence of high-revolution trucks, the wisdom of the ancient Chinese people combined, the power source has evolved from the manpower and animal power of the rollover to the slow development of the car through the water flow, which has evolved to the current power. Waiting for the delivery of animal products, I like the people of ancient China. 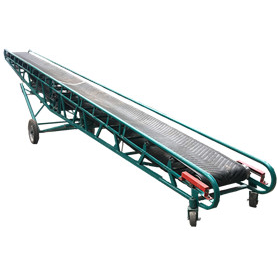 Since the middle of the 17th century, people began to use aerial ropeway to transport bulk materials. Similar to the strops still in existence in southwestern China, erecting ropes between the two mountains is convenient for transportation.

The first industrial revolution pioneered the era of replacing manual labor with machines, replacing the manual factory with a factory system and replacing manual labor with machines. In 1795, in a magazine in Philadelphia, USA, the canvas conveyor belt was described as a "wide belt or canvas belt that was rotated on two rollers in a frame or slot", which is the earliest document on the description of conveyors in history;

During the second industrial revolution, the invention of generators and electric motors made the world enter the "electrical era" from the "steam era", the industrial focus shifted from the light textile industry to the heavy industry, and the conveyor entered the development of the big leap in the period;

In 1868, mobile belt conveyors appeared in the UK;

In 1887, a screw conveyor appeared in the United States;

In 1892, the American Thomas Robins invented the trough structure, and the conveyor began to be used in the mining industry, determining the basic form of contemporary conveyors;

In 1905, a steel belt conveyor appeared in Switzerland;

In 1906, inertial conveyors appeared in the UK and Germany;

In 1913, American Henry Ford founded the world's first automotive assembly line. This flow-through method was later called "Ford" and was widely promoted around the world. This system organizes mass production on the basis of standardization, and mechanizes and automates all operations, becoming a production organization with high labor productivity;

The third industrial revolution has continued until now, and the development of conveyors has been faster.