How to choose conveyor belt?

The conveyor belt is the main component of the belt conveyor, which is not only the bearing member but also the traction member. In the conveyor, the cost of the conveyor belt accounts for 30%-50% of the total equipment cost, but it is the part that is easy to wear out. Therefore, choosing the right conveyor belt is very important. Accurately state the name and nature of the specific material. In particular, particle size, temperature, whether acid, alkali and other corrosive and special requirements. Specify the temperature used if necessary.

Heat resistant conveyor belt is mainly used for conveying high-temperature materials, such as sinter, hot coke, cement clinker, hot casting, etc. According to the main performance of resistance to tropical damage and loss of ability to work, different heat resistance level, using epdm or styrene-butadiene rubber as a covering adhesive; High strength and high permeability polyester canvas as a strong layer, covering the glue and the skeleton layer laid between the heat-resistant glass cloth, so that the heat-resistant life is greatly improved. According to the user's requirements, can be made into a ring belt. 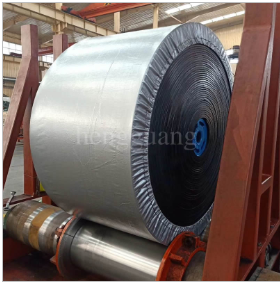 If you have selected the appropriate conveyor belt, also pay attention to the use of conveyor belt. Conveyor belt in the process of use will be elongated, one part is elastic elongation, can be restored to the original state after the withdrawal of external force, the other part is the contraction of the skeleton material elongation, this part is unable to restore. The running speed of the conveyor belt should not be greater than 2.5m/s in general. The material with large size and large wear and unloading device with fixed pear should use low speed as far as possible. Avoid the conveyor belt from being blocked by the rack, pillar or block materials, and prevent collision, breakage and cracking. When the conveyor belt is partially damaged, use artificial cotton to repair in time to avoid expansion. The conveyor belt should be kept clean during transportation and storage, avoid direct sunlight or rain and snow immersion, avoid contact with acid, alkali, oil, organic solvents and other substances, and keep away from the heating device one meter.